Easy to throw and easy to control, the Impact will help you to stay in the fairway and lower your scores. The engineered rim crosshatching projects a faint wave around the Impact as it flies, displacing air to enhance glide while keeping the disc flat and straight. Available in ESP 150 class too.
Posted by steve at 4:05 PM No comments: 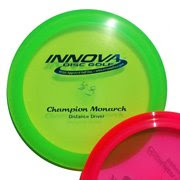 About the Monarch
The Champion Monarch is our longest range Distance Driver with a significant high speed turn. This predictable high speed turn makes the Monarch a good choice for beginning players and those with slower arm speeds. The Monarch also makes a great roller disc. This disc is much like a faster Roadrunner with more glide. The Monarch is the first 10 speed disc in to be available in weights below 160 grams in champion plastic.

About INNOVA's Champion Plastic
INNOVA’s Champion Line is produced with a unique plastic that provides outstanding performance and durability. Champion discs are distinguished by a clear or pearlescent plastic. Our Champion Line discs retain original flight characteristics for an extended period of time. Whether used in heavily wooded situations, or on extremely rugged courses, our Champion Line plastic will continue to perform predictably and avoid damage better than any other plastic. Originally designed for professional players, Champion Line discs can handle the increased power of top level players. The Champion Line has recently expanded to include most of our drivers as well as many of our popular disc models in other categories. Many Champion Line discs are now available for custom hot stamping. Certain Champion models are available only through our successful Candy Fundraiser Program.

Speed - Speed is the ability of the disc to cut through the air. Speed ratings are listed from 1 to 12. For more info on Speed, click here.

What does 'stability' mean in terms of disc golf?
Essentially, stability refers to the angle of the disc relative to distance traveled as it slows throughout flight. Don't worry, this isn't a physics lesson. Let's look at some real-world examples.

Stability For the sake of simplicity, let's assume you are a right-handed player, and are using a backhand throwing style:

Beyond The Basics
Stability is a relative term -- meaning what is stable for you might be understable for the next person -- because disc stability is highly influenced by the power and snap of the thrower. Most folks might consider the Eagle to be overstable, but touring pro Todd Branch of the Winnicrew has enough power and snap to consider the Eagle to be understable in many situations. Fortunately for the rest of us, the general stability ratings given to discs are geared toward the average disc golfer.

Disc wear can also have a great impact on the stability of a disc. All discs become more understable with use and abuse, some faster than others. If a disc 'wears well,' that means it can take considerable abuse and still retain much of its original stability. The best wearing discs tend to be premium lines such as Innova's Champion Line and Discraft's Elite Pro Line. You pay a little more, but they last longer.

Most disc golfers carry a mix of stability in their bags, since not every throw needs to go straight. A dog-leg left might be better played using an overstable disc, while a dog-leg right might call for understable. The important thing to remember is this: regardless of what disc your friends think is cool, you'll be much happier throwing a disc that is compatible with your throwing style and skill level.

When shopping for drivers, new players should look for discs that are described as stable or understable. As your skill improves and your drivers become more understable, you will begin to discover other discs that will quickly become your new favorites. As you master more and more overstable discs, you will experience one of the great joys of playing disc golf.
Posted by steve at 3:48 PM No comments:

Roc up the middle

Every Tuesday throughout the spring and summer, a group of 20 or so Michigan disc golfers gather to compete in the Club Dead Match Play League. In this format, handicapped players are going head to head to earn points for their team on each hole played. That is, if you card a two on the first hole and I card a three, you earn two points for your team. The player with the most points at the end of the round wins the match, and the team with the most match wins are the season champs.

The golden rule of disc golf My teammate this year is Pat Hawks, who many of you might recognize as the player at the upper left of the DiscLife.com homepage. Pat is a good pro disc golfer, certainly a much stronger player than me. He throws farther and putts better. Despite this fact, our scores in the league are often similar.

The match play league shoots at a course that is long and tight, with unforgiving rough on virtually every hole. If you're going to try to throw birdies here, you'll need distance and accuracy.

For years, my strategy on this course has often been to throw a Roc up the middle. When sufficiently broken in, the Roc is an ultra-stable approach disc, and the most important disc in my bag. Whatever angle you throw it on is the angle it will finish on. I choose the Roc here for this reason: driving 450 feet up a 40-foot wide fairway is a risky proposition, whereas throwing two 225-foot shots straight and true is relatively easy. Avoiding bogeys will always increase your chances for success.

Any disc golfer with some experience understands that most players love to throw long. It's human nature to want to out-throw your buddies, and my teammate Pat is no exception. He's got one of the longest arms in the region, and regularly elicits the the 'oohs' and 'aahs' of bystanders as they watch his drives glide 450 feet. Of course, those bystanders will often finish with an 'aww' when a slight miscalculation or timing error results in a drive well off the fairway and into the shule. With every huge birdie crush, a potential bogey waits to pounce.

disc golf photo: Pat Hawks throws for huge distance For reasons of his own, Pat picked a new strategy last week. After watching me throw conservatively time after time, he finally made the decision to put his driver away and reach for his own trusty Roc.

18 holes later, Pat had shot his way to a -1, the first time in over five years he had thrown under par at this very difficult course (by comparison, his score the previous week was +13). With all of his years of experience, he'd finally applied the golden rule: if you want to win at disc golf, you have to play the course. It's golf, not a distance competition. Wow your friends with lower scores instead of longer drives.

After the record-breaking round, we were discussing the day's match over some beers, and trying to come up with a name for our team. Pat's enthusiastic first suggestion would be our eventual choice: Roc Up The Middle.

Sounds like a winner to me.
Posted by steve at 3:46 PM No comments:

Chances are good you've been doing what you've been advised to do by many successful players, and that is to focus on your target - be it a chain link or a spot on the pole - and throw to it. The problem is that you're not giving the disc enough power to hold the line long enough, a result of not wanting to go long in case of a miss. >DOINK<. Putting with a good line but coming up short is always a disappointment.

You could compensate by learning to putt with more power, but there is a better way to get into the chains or keep a bad putt close the basket. What you need, my friend, is a little more loft. Here's how to make it happen.

Regardless of how long the putt is, imagine a bush or other hazard is at the midpoint between you and the basket. It would be about the same height as the basket, and your goal is to pick a spot in space where you could safely throw over the bush and into the basket. Pick the spot directly over the bush that you want to pass through, and then re-focus your attention back to the chain link you want to hit. Keeping the chosen spot in space in the back of your mind, pop your putt to the target.

You'll be amazed at the instant results.
Posted by steve at 3:45 PM No comments: