Dave Feldberg leads after round 1 of the European open 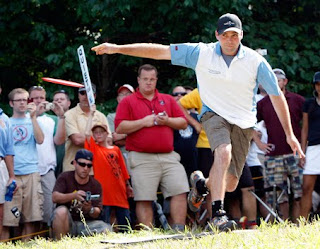 Dave and Jesper Lundmark from Sweden are tied at 51.
Posted by steve at 9:11 PM No comments:

I talked to Tim Gill today, the designer of the course. He said they had to cut back on the money for the course, so it is only going to be a 9 hole for now. It's going to be a good 9 though. He said it should be done in 3 to 4 weeks.
Posted by steve at 4:44 PM No comments:

SARATOGA SPRINGS -- Saratoga Spa State Park would get a visitors center near its entrance, a "Frisbee golf" course and new trail loops under a master plan released Wednesday by state leaders. A second traditional golf course and botanical garden didn't make the cut.
Posted by steve at 12:41 AM No comments:

New course to be built in Helotes texas

Discussion of and action on the creation of a disc golf course - Council member Whitehead said he had been apprehensive about spending the money, but the money is already in the budget; so he is in favor of it.

Council member Massey had fun at the demonstration. It can only be good for the community; it is a low impact sport and can help people lose weight. It won’t take much money. The area is not good for a playground because it is in a flood zone. (I just think I should mention here that a lot of parks/playgrounds in this and the San Antonio area are in flood zones. It’s a good use of that land. I’m guessing that not too many people go to the park during a flood.) Also, a playground would have required a restroom (I guess golfers can hold it longer?).

Council member Legendre said that originally he didn’t care one way or the other, but he had fun and the money has already been budgeted. Disc golf will bring more people to Helotes and there would be less vandalism (?).

Council unanimously approved the installation of a disc golf course in the Helotes Natural Area (which, I’m guessing, will no longer be a natural area), and authorized Mayor Schoolcraft to administer and oversee the design and construction.

Council also unanimously approved P&Z’s recommended amendments to the B-3 Overlay District.
Posted by steve at 12:36 AM No comments: