The sport is really taking off in Sweden. 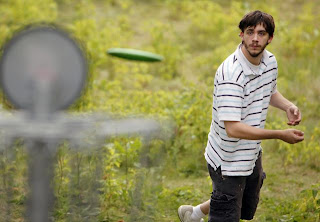 Sean Buckley tossed a disc at the Brockway Park Disc Golf Course in Rosemount. Disc golf was added to the new park in response to the growing populairty of the sport. The park is being developed on the site of a former glass manufacturer. Playscapes and picnic shelters will be added this fall.
Posted by steve at 7:45 PM No comments: 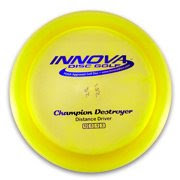 About the Destroyer
The Destroyer is a very fast stable long distance driver. This disc is much like a faster Wraith, but with a little more high and low speed stability. Great disc for sidearm throwers and those with lots of power. Can handle headwinds and throws with off axis torque. Not suggested for beginning players.
Posted by steve at 6:42 PM No comments: 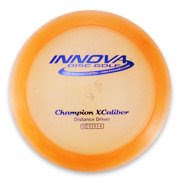 About the XCaliber
The XCaliber is for those who have got to have the biggest and the baddest. Extremely fast with glide and stability. The XCaliber achieves maximum distance when thrown low, flat, and hard. This is the one for confident bombs in windy conditions. The XCaliber has the stability to let the biggest arms throw with full power. If you have a cannon for an arm, you'll want an XCaliber. Great disc for sidearm throwers and those with lots of power. Can handle headwinds and throws with off axis torque. Definitely not designed for beginning players.
Posted by steve at 6:40 PM No comments: 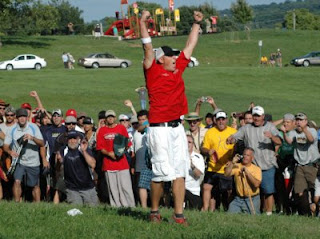 It took one week, 140 holes, and a swarm of butterflies in the gut, but Avery Jenkins overcame some late putting problems and a strong closing surge by Josh Anthon to capture his first Professional World Championship title in Kansas City at the 2009 PDGA World Championships.

Avery Jenkins brought a two throw lead with him into the final nine holes, played at the scenic Blue Valley course in Kansas City. But a drive that came up short on hole five, and a missed putt on six left the door open for Anthon to capitalize and move himself into a first place tie.

The estimated gallery of 1500 fans that surrounded the Men's Open group throughout the afternoon were delighted at the intense drama that unfolded near the end. On the 476 feet long, hole nine of the finals, both Jenkins and Anthon had solid drives onto the island green, leaving them with relatively easy upshots and drop-ins to force the sudden death. And while Jenkins neatly hit the bottom the basket to rest easily with his drop-in, Anthon shorted his second throw, leaving himself with mind-numbing 27-feet putt that he needed to force the extra holes.

Anthon eyed the basket carefully, as the electrified gallery held their breath to see if Josh could make what, at that point, was the biggest putt of his career. He backed off his lie once, as if to punctuate the importance of that single throw, but stepped back up quickly and confidently and proceeded to hit the heart of the chains to make the shot and set the immense crowd roaring and sprinting into position to watch the epic battle continue in sudden death.

Both players seemed very tight on the first two holes, as each misthrew crucial upshots on hole one, and laid up on hole two to keep things tied up. But, if there were any butterflies on the first two holes, Jenkins and Anthon showed no signs of them on hole three, where they each unleashed booming uphill drives that were all of 400 feet into the fairway.

After the sudden death moved past the third and fourth holes, the fateful, and shorter hole five is where the tournament would be decided. Jenkins lead off with a low-liner up the sloping 287-feet hole, leaving himself with an 18-feet putt. Anthon's drive looked similar to Jenkins's, but the disc never faded towards the basket and landed some 35 feet away.

Again the crowd was hushed as Josh slowly climbed the hill towards what he knew was a must-make putt. And while his excellent throw was definitely chain high, Anthon's toss was off-center enough for the disc to fly-by without going in the basket.

This left the crowd bellowing chants of, "Come on Avery" and "Finish this now," as Jenkins stepped over his historic last putt. With the confidence that a World Champion must have, Jenkins smashed the chains in the middle of the post and won his first professional world championship, clearly the biggest win in his outstanding career.

Only one other Men's Open World Championship required a playoff, as Gregg Hosfeld defeated Mike Sullivan in Toronto in 1987.

The Professional Disc Golf Association would like to express our most sincere gratitude and thanks to the Kansas City Flying Disc Club for a most excellent 2009 PDGA Disc Golf World Championships. 922 players from 13 countries and 44 states attended the event making it the largest world championships in history. It was also stated by many of the competitors that this was also one of, if not the best, world championships in history. Tournament Directors Jack Lowe and John Chapman, along with Rick Rothstein and a bevvy of volunteers put on a show that will be tough to match for years to come and they should all be very proud of their accomplishments.

Log on to PDGA.com over the next couple of days as we will be publishing additional feature wrap up stories on the 2009 PDGA Disc Golf World Championships.

The PDGA would like to congratulate the following members for claiming world championship titles in the respective divisions:

Vibram Gets in the Game with Unique Rubber Disc Golf Putters

NORTH BROOKFIELD, Mass.--(BUSINESS WIRE)--Vibram is changing the course of disc golf with the introduction of two putter styles and a mini course marker, all made of Vibram rubber instead of the traditional plastic. Disc golfers throw discs from a tee area to a target (hole), completing each hole in as few throws as possible. Discs of various profiles (driver, mid-range and putter) with different flight characteristics are used, depending on the distance and terrain, just as woods, irons and putters are used in traditional golf.

“Usually, plastic has been the material of choice for discs,” explained Vibram Open Tournament Director Steven Dodge. “The Vibram X-Link rubber compound offers a step up in both grip and durability. Over the life of the disc, this will lead to a more consistent flight, which is the overall goal.”

The exclusive X-Link Vibram rubber compound offers many advantages over the traditional plastic material including more durability in hot and cold conditions and better grip, which leads to greater flight consistency. Designed by Quabaug Corporation, the exclusive North American manufacturing licensee for Vibram, the putters and mini will be launched at the Vibram Open at Maple Hill in Leicester, Mass. August 14-16.

Unlike plastic, which tends to shatter in cold and become floppy in heat, Vibram disc putters withstand extreme temperatures for consistent flight regardless of weather. The Vibram putters also resist scuffing, denting and warping, resulting in more reliable throws. As with all products made by Vibram, grip is paramount.

The VP (Vibram Putter) is a driving putter available in standard or firm X-Link. Referred to by one field tester as “the greatest driving putter ever made,” the VP will be released at the Vibram Open. The Summit, with a name borrowed from Vibram’s hiking legacy, is a straight putter for anhyzer (slice) approaches or drives. The Vibram Mini, boldly emblazoned with the Vibram logo, gets style points as a course marker. Expected MSRP for each putter is $17.95. Both putters and the mini will be available at Pinnacle Retail stores on August 14th.

About Quabaug Corporation and Vibram

With proven technology and a 70-year history in the manufacture of soling for footwear, Quabaug Corporation is uniquely qualified to offer disc golf products that capitalize on the superior resilience of rubber. Located in North Brookfield, Massachusetts, Quabaug Corporation employs 300 people and manufactures Vibram® shoe soling and QuaBoing® resilient rubber surfacing.

Quabaug Corporation also offers dog toys, training tools, leashes and collars in its line of Vibram® Pet Products. These include Vibram balls, sticks, discs and the Shooey Chewie tug toy, which are all molded in the USA from rubber compliant with California Proposition 65. In addition, they provide specialized hoof protection products for farriers.

Vibram is a registered trademark of Vibram S.p.A of Italy. Quabaug Corporation is the North American manufacturer of Vibram products under exclusive license. Visit Vibram at www.vibram.us.
Posted by steve at 11:07 AM No comments:

New course at Bunker Hills to be done by mid Sept. 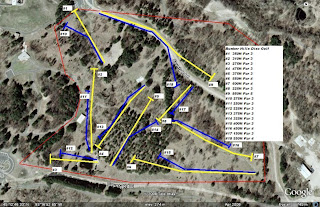 I have been talking to the director of Parks for Anoka county, and the landscape Architect for the county. The word is the Bunker Hills DGC work will begin this month and be open in early to mid Sept. The layout is 18 holes par 60. longest hole 850ft. 4 par 4's, one par 5, rest par 3's. The location is the first left in the park coming in from the Bunker Lake blvd side. This is the course layout.
Posted by steve at 9:07 AM No comments: